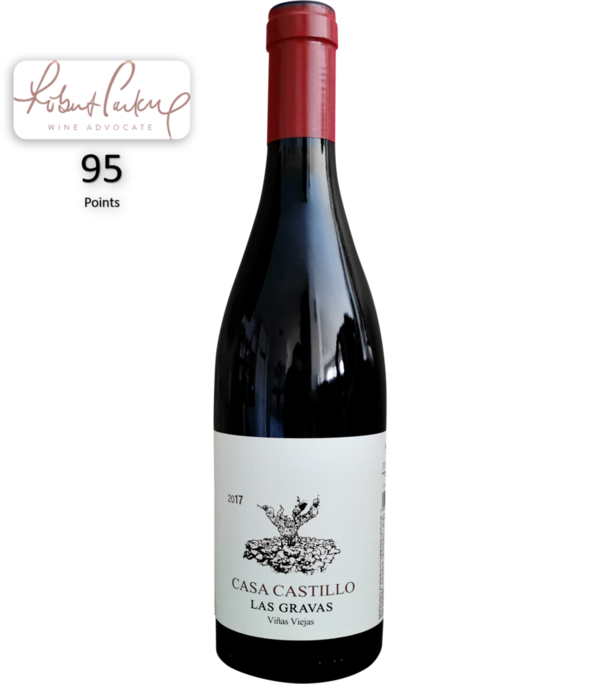 The 2017 Las Gravas is surprisingly floral and ethereal, perfumed and elegant. Syrah has disappeared from the blend of this wine—it now has 20% Garnacha to complement the Monastrell—and they think this is going to be the blend that stays in this wine, which has seen more changes in its life than the rest of the portfolio. This is for sure the most elegant vintage for this bottling; the wine matured in 500-liter barrels and then spent four months in 5,000-liter vats after the blend was done. There are no aromas of oak whatsoever, and the wine is surprisingly fresh, as if the Garnacha helps to contain the power of Monastrell on the gravel soils, adding texture and perfume. This is beautiful. 26,500 bottles were filled in March 2019.

Casa Castillo would be one of the single-estate appellations that would make sense in Spain, but the name has been misused so much that they don’t want to hear about it. I visited the north and west limits of the estate, which are going to be developed with mostly Monastrell selected from their old vines and a plot for white grapes that will probably be Garnacha Blanca and Macabeo, in a place that has gypsum. The La Mojonera plot is on very degraded, very white soils (with some green tints) that reflect heat and can provide finesse, and the west orientation and combination of all that should deliver fresher Mediterranean whites.

The base of all their soils is limestone, like the whole of the Mediterranean coast that was under the sea in the tertiary era and is now sedimentary limestone soils; but there are many different levels of decomposition and combinations of the mother rock that result in many different textures of the soil. If you combine that with the other elements, altitudes and orientations, you have a great diversity within the estate. What is amazing is how they have been able to see all of this and make wines that are definitely distinct and talk about their birth place.

I had a very interesting discussion with winemaker and proprietor José María Vicente about the last few vintages. In general, he's very happy with the last four years—2015, 2016, 2017 and 2018—but what he thinks about 2016 and 2018 cannot be extrapolated to other producers in the Mediterranean, as they were challenging years, especially 2018. For many, 2018 was the worst harvest in recent years, and some lost a huge percentage of the crop to maladies like mildew, oidium and black rot.

2014 was also warm and dry, a minor vintage for Casa Castillo. 2015 was warm and dry, a very Mediterranean vintage that resulted in ripe and powerful wines. 2016 was a more continental year, following the path of 2013, even cooler than 2013. It was not an easy harvest, and they had to work more in the vineyard (it’s not a great year for the region in general). 2018 kind of followed the same path, and they dropped a lot of fruit (20%) to help the rest ripen properly, getting rid of the bunches that were less perfect. It was a late and cool vintage where they had to work in more or less the opposite way than in 2017, a warm and sunny year when they had to protect the grapes from the soil.

The 2017 vintage was more Mediterranean again, but the difference was that in 2017 they had a lot more rain during the winter, and the plants had enough water. It didn’t rain between April and July, and then 70 liters of rain in late August slowed down the harvest that had started very early. The plants got rehydrated and completed the ripening cycle perfectly. For José María Vicente, the medium- to low-yielding year is the perfect Mediterranean year, with freshness added by those rains, and he considers it the most complete vintage since Casa Castillo started in 1991. 2018 was very challenging and also continental in style, wetter and not as warm, in line with 2013 and 2016, but they worked hard in the vineyards and are a lot happier than the majority of other producers in their region.

They are in great shape, and the conjunction of personal circumstances, the buy-out of the family, the oenological maturity and the perfect circumstances of the 2017 harvest provided the conditions for their best harvest yet. I tasted the wines on a typical Mediterranean morning—cold early on but with sun and light—and the wines showed particularly floral and elegant. The wines are produced with all or part full clusters, normally fermented in underground concrete pools and aged for a long time in large oak barrels, 500 liters and larger, which is nothing other than what was traditionally done in the region. I cannot recommend these wines enough.