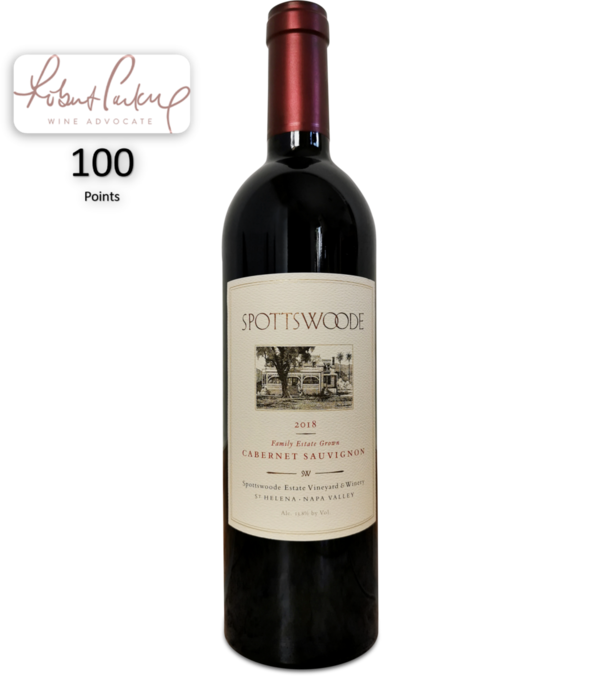 Composed of 86% Cabernet Sauvignon, 9% Cabernet Franc and 5% Petit Verdot, the 2018 Cabernet Sauvignon from Spottswoode explodes from the glass with bombastic notes of crushed blackcurrants, fresh blackberries and wild blueberries with hints of cardamom, lilacs, incense and fragrant earth, leading into wafts of pencil shavings and crushed rocks. Medium-bodied, elegant and yet so, so intense, it has layers of bright crunchy fruit and mineral sparks galore, framed by exquisitely ripe, finely pixelated tannins, finishing very long and energetic. Wowsers..

Clearly a stupendous effort but just far too young at this stage, Spottswoode's 2018 Cabernet Sauvignon boasts a concentrated, velvety core of black cherries, cassis and dusty loam, then supports it with hints of cedar and toasted oak. It's full-bodied, rich and youthfully intense, with a long, compelling finish that just won't quit. Give it a few more years, and it may indeed reach the perfection my predecessor predicted for it.

This was my first visit to Spottswoode, an impeccably manicured and historic property on the western outskirts of St. Helena that dates back to 1882. The modern-day Spottswoode story dates back to 1972, when Mary and Jack Novak moved north from Southern California and purchased the house and 30 acres of adjacent property. Fifteen adjoining acres were added the following year, and planting grapevines commenced, taking place in 1973 and 1975. Today, there are 37.5 planted acres, mostly Cabernet Sauvignon. In the first few years, grapes were sold to other producers, but Tony Soter came on board in 1982 as the founding winemaker. He was succeeded by Pam Starr (1992–1996), Rosemary Cakebread (1997–2005) and Jen Williams (2006–2009). The winery was built in 1999; prior to that, the wines were made offsite, with vineyard management brought in-house in 2003. The vineyards have been farmed organically since 1985 and certified organic since 1992. Replanting took place in stages, with portions of the vineyard replaced in 1991, 1993, 1997 and 1998. Biodynamic principles are applied (Demeter-certified), with great attention paid to regenerative soil practices, including rotating cover crops. Along the edges of the vineyards and even embedded within are several insectariums of flowering plants, to promote biodiversity, plus nesting boxes for swallows, bluebirds and birds of prey. The first Certified B Corporation winery in Napa, Spottswoode has been recognized with the Robert Parker Green Emblem for sustainability since it was first awarded. Current winemaker and vineyard manager Aron Weinkauf joined the team in 2006 and took over winemaking in 2011, so it was interesting to get his thoughts on an 11-year vertical of the estate Cabernet Sauvignon, which was presented blind by Weinkauf and Beth Novak Milliken, the winery's president and CEO. Not knowing which vintage was which made it impossible to be biased by vintage reputation, but certain wines still stood out. I found the 2013 disappointing for its closed, overly tannic nature, while Weinkauf said, "It's always had more tannins than any other vintage. This is probably the best it's tasted in years." As I've tasted better bottles in the past, owners of it may want to let it sleep several more years before pulling a cork and hope that initial reviews were more accurate than this impression. The other slight disappointment was the 2017, which again seemed less richly fruited than normal and slightly green and astringent. I suspect it's simply at an awkward stage in its evolution. On the positive side, probably most notable was the brilliant showing of the yet-to-bottled 2020 (scheduled to occur near the end of August 2022). Picking wrapped up the day before the Glass Fire started, said Weinkauf. All the 2020 vintage talk has focused on the risk of smoke taint, but this beautiful wine is the product of a fairly warm vintage, one without dramatic heat spikes. The 2011, from a cool, much-maligned vintage, showed tremendous finesse and complexity. My favorite of the bottled wines was the 2012, a gloriously seductive and complete effort that is drinking well now, and it should continue to do so for another two decades. In addition, we tasted two vintages of the Sauvignon Blanc, which combines fruit from Sonoma and Napa, and the 2019 Cabernet Sauvignon Lyndenhurst, which includes approximately 40% estate fruit and 60% purchased fruit, largely from growers in St. Helena, Oak Knoll and Atlas Peak. That wine was previously reviewed on November 30, 2021 (93 points), and as my impressions were largely consistent with that review, I've not bothered to repeat it. In summary, although I found more vintage variation among the estate Cabernet than my predecessor here at RPWA, I think some of that can be attributed to the format of the blind vertical tasting, which, in retrospect, seemed to emphasize the differences between the wines. I should point out that despite that, there is a strong, continuous stylistic thread woven throughout. The wines emphasize balance and elegance over sheer power and ripeness, with restrained alcohol levels, silky tannins and a complex but subtle interweaving of gentle herbal nuances with fruit that ranges from cherry and black cherry through cassis. Having participated on two occasions in the Cape Mentelle International Cabernet Tasting, where the Spottswoode wine has been presented blind in the company of 19 other world-class efforts, I will unequivocally state that Spottswoode belongs on that same stage with such international luminaries as Ornellaia, Cos d'Estournel and Cullen's Diana Madeline.