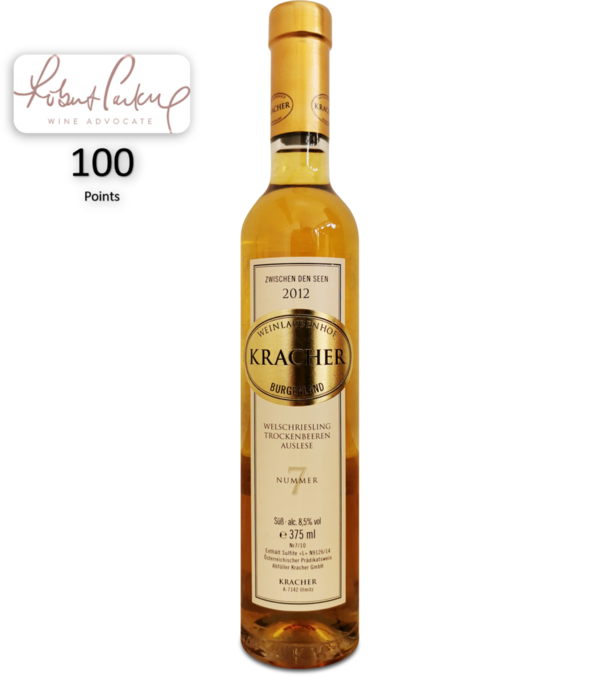 The 2012 Trockenbeerenauslese No. 7 Welschriesling Zwischen den Seen is a perfect botrytis wine offering an intense and concentrated, spicy bouquet with ripe quince, peach and apricot as well as peppery and honey aromas. Full-bodied, highly concentrated and lush on the palate, this is a stunningly finessed, refreshing and savory TBA with grapefruit bitters on the saline finish that uplifts the sweetness and concentration and leads to an incomparably long finish. This is a living legend in the Kracher history and proves that TBAs can also improve dramatically over the years on the bottle. Tasted at the domaine in July 2022.

Weinlaubenhof Kracher is the first domaine in the German-speaking countries to be allowed to distribute its wines through the global négociant network of the Place de Bordeaux. Starting in September this year, the 2019 Grande Cuvée Trockenbeerenauslese No. 5 will be distributed via négociants for all the countries except the US and in the home country of Austria. The limited wooden Kracher Collection Box, which contains all seven of the Trockenbeerenauslesen from the 2019 vintage, will be released in October and will also be distributed via the Place de Bordeaux.

The Grande Cuvée of Welschriesling and Chardonnay is Kracher's flagship wine in terms of balance, finesse and complexity. Other TBAs may be sweeter, fruitier and even more concentrated, but none is more harmonious, more complete. Welschriesling is a great grape for the sweet wines of Lake Neusiedl, and it can also deliver world-class wines as a soloist—the 2012 TBA No. 7, for example, is rich in flawless perfection—but together with barrel-fermented Chardonnay, it adds a nobility and finesse that is breathtaking even in its youth. Kracher's TBAs are united not only by their rich and precise fruit but also the noble texture and their complexity, which has recently been significantly increased once again: the 2019s were on their lees for 29 long months, longer than ever before. In the finish, especially after several years of bottle aging, Kracher’s TBAs reveal not only spicy and herbal notes but also that persistent saline taste that makes the specific terroir of the Neusiedlersee region tangible in taste.

Lake Neusiedl is a steppe lake that long ago was about 10 times larger than it is today. Thus, the vineyards today are located on soils that were once covered by the lake and "that still have high mineral and salt contents after it dried up," as Gerhard Kracher points out. They give the wines a typical mineral note and freshness. "The specific climate of this nature reserve has provided perfect conditions for the development of Botrytis cinerea for more than 60 years," Kracher explains, reflecting the family history of the Weinlaubenhof that became world-famous in the 1990s with Gerhard's father, Alois, who became the ambassador not only for Austrian noble sweet wines but Austrian wines in general. At that time, most of the wines were sweet, but since global warming causes weeks of drought even in autumn and thus less botrytis than in the 1990s, Gerhard Kracher has returned to producing a significant number of dry table wines again as is grandfather did. He also produces a remarkably good pink sparkling wine, and together with his friend Aldo Sohm, star sommelier in New York's Le Bernardin and Sohm's Wine Bar, he handcrafts an impressive little series of dry Grüner Veltliners in both Burgenland and Weinviertel under the Sohm & Kracher brand.

However, it is forbidden to compare the TBAs from Lake Neusiedl with those from Mosel, Rhine and Nahe, which grow on completely different soils and and under completely different climatic conditions and which are of unique savoriness and refinement, which they preserve for decades and even longer than a century. For many consumers, especially in Asia, these wines are not necessarily too expensive (and God, they are expensive!) but too acidic. They appreciate the rich TBAs from the Seewinkel more, because here the pH levels are higher and the acids are milder. Also, the small, new barriques used for the Nouvelle Vague style chez Kracher give these wines a balanced texture and elegance from the start—something that usually takes a Mosel Riesling two to three decades to achieve.

For 20 years, it has been my desire to try matured Kracher TBAs. This year, Gerhard and I had a few extra hours, and so he opened a whole series of aged TBAs from different vintages, including 2012, 2007 (the first vintage that Gerhard bottled after the early death of his father) and the legendary 2002 but also 2005, 2001 and 1996. All of these rarities prove that Kracher's TBAs are long-distance runners even though they already taste attractive in their youth. Against the backdrop of the matured wines, which before 2007 had been produced and bottled by Gerhard’s father, Alois, the progress Gerhard has made also becomes even clearer. Probably even with the 2019s he has succeeded in his finest collection of TBAs so far. While seven TBAs is not a particularly large yield, the fact that he was able to leave them on their lees longer than usual (29 months instead of 22-24 months), in part due to markets being restrained by the pandemic, means that they seem to have become even fresher, more precise and saltier. Their transparency and finesse, at any rate, is astonishing even in their youth, and so Kracher's 2019s logically achieve the highest ratings his young TBAs have received in The Wine Advocate to date (and the same can be said for the lower predicates). His 2019s have already reached this extraordinary level of precision, finesse and transparency for which many a predecessor had needed a good decade or two after a rather turgid beginning. Kracher's 2019 TBAs and the exceptional form of the 2012s and 2002s, in particular, are further proof that we are dealing with one of the most important and best sweet wine producers in the world.

Whereby I consider the term “sweet wine” for this kind of immeasurably rich and elegant wines almost a banalization. Kracher's TBAs are not great because they are sweet, but because for all their richness and concentration they remain elegant, fine and sensual, and from an age of 10 or better 20 years they also become remarkably complex and stimulating. One could do an entire menu with these beautifully balanced and pristine textured wines––only to do so, one would first have to own them and leave them alone for a decade or two.